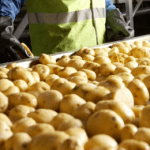 For PepsiCo, one of the world’s biggest makers of potato chips, the key to producing the crispiest chips possible is all about driving moisture out of raw potatoes. Paradoxically, though, potatoes are made up mostly of water.

At a Walkers Crisps factory in Leicester, England, PepsiCo is turning this soggy challenge into a water-saving innovation. The goal: to extract so much water from inbound spuds that the factory can go “off grid,” drawing little or no water from public taps. Doing so, PepsiCo hopes, will help save the plant roughly $1 million a year in avoided water costs.

“The idea for taking factories off the water grid came from a simple observation by our front-line teams that potatoes are 80 per cent water,” says Martyn Seal, PepsiCo’s European director of sustainability.

PepsiCo’s efforts to turn off the taps at its Walkers plant in the U.K. is one sliver of a bigger batch of initiatives to make its global operations run with less water. In 2010, the food-and-drink giant, which turned over $66.5 billion (U.S.) in sales last year, released its first comprehensive water report. The effort, similar to initiatives out of rival Coca-Cola, set out details of its water consumption alongside plans on how to use that water more productively.

One of its headline goals is to improve the efficiency of water use – measured by water consumed per unit of production – by 20 per cent by 2015, using 2006 as a baseline. PepsiCo hit this target last year, four years ahead of schedule. Another goal is to strive for “positive water balance” in water-distressed areas. This means for every unit of water PepsiCo uses, it strives to restore, replenish or prevent loss of the same amount or more in the same region. It also aims to provide access to safe water for three million people in developing countries before 2016.

Early on, potato-chip plants emerged as a juicy target for these goals. Making chips is surprisingly water intensive. In a normal year, some 350,000 metric tons of fresh tubers is shipped to the Leicester factory – the equivalent of some 13,000 tractor-trailer loads.

In the plant, potatoes are washed, peeled and sliced. A steady flow of H2O is used at each of these steps. In Leicester, this process demands roughly 700 million litres of water annually, the equivalent of roughly 280 Olympic-sized pools. Yet as crucial as water is while preparing the raw spuds, it’s an unwanted troublemaker thereafter. The thin slices are plunged for a few minutes into oversized fryers filled with oil boiling at 190°C (375°F). Water trapped in the potato slices vapourizes instantly, turning the otherwise inedible starch into an addictively crunchy treat.

In a conventional set-up, the cloud of steam that rises from these vats is vented out into the air. PepsiCo engineers recognized that the vapour represents a huge waste of both water and energy. To recover these wisps of moisture, PepsiCo fit a contraption onto the plant’s exhaust towers. Inside, the hot steam passes over a network of thin, cooled tubes. Moisture from the potato vapour condenses on the cooler tubes for easy collection. The process also recaptures traces of cooking oil from the exhaust. Both the oil and water can be reused. About four-fifths of the moisture that is normally lost is recovered.

Together with systems that recycle about two-thirds of the plant’s wastewater, the steam-recapture project is on track to supply enough water to hit PepsiCo’s goal of drawing zero freshwater in Leicester. The company is already testing the technology at similar sites in Holland and Belgium, part of a plan to extend these practices to other large European operations and, later, worldwide.

A successful pilot in the Leicester plant “will provide us with a technology suite that we will be able to reapply at other PepsiCo plants, particularly in areas of severe water scarcity,” Seal says. “This is an opportunity to realize meaningful cost savings while reducing our impact on the environment.”

Combined with other projects across PepsiCo’s operations, the steam-recapture efforts contributed to savings of $45 million in water and related energy costs last year, compared with the 2006 base when the company began these efforts. By volume, in 2011 it used 16 billion fewer litres of water, compared with 2006.

As much as PepsiCo execs crow about the bottom-line impact of these efforts, they point to strategic benefits too: The company must plan for operating risks that droughts pose to future operations. By 2030, global demand for freshwater could exceed supplies by 40 per cent, explains Dan Bena, PepsiCo’s senior director of sustainable development.

“If this gap is not closed, there will be no business as we know it today,” he says.

This article was originally published on Corporate Knights