Ben Jerry’s and Chanel are benefiting from “Carbon Insetting”

Insetting does more than just offset carbon emissions — it helps companies boost resilience and care for the ecosystems that provide their raw materials.

Ten years ago, serendipity set Tristan Lecomte on his path to planting millions of trees around the world.

What began as a 5,000 tree planting initiative in 2006 grew into a massive public-private partnership, with 3 million trees planted by farmers…

Lecomte was CEO of the French organic and fair trade company Alter Eco, and his eco-conscious consumers were pressing him about his actions on climate change. So Lecomte calculated his company’s carbon footprint and began planting trees in partnership with the Peruvian farmers who supplied Alter Eco with cocoa to both offset the company’s emissions and help the farmers. The 5,000 hardwood trees they planted helped restore the soil, biodiversity and water systems on the cocoa farms, while giving the farmers another source of income.

“I love nature and I thought it made sense for the farmers,” says Lecomte about the tree planting. “I never knew it would become my work.”

But Nespresso, a division of Nestlé, was sourcing coffee from the same Peruvian region and asked Lecomte for help with a similar initiative, and what began as 5,000 trees for Alter Eco in 2006 grew into a massive public-private partnership, with 3 million trees planted by farmers, an additional 40 million pledged by the government, and the creation of a 2.4 million hectare (5.9 million acre) biosphere reserve in the Peruvian Amazon.

And out of that came PUR Projet.

To date, PUR Projet has planted 7 million trees for dozens of big brands — Chanel, L’Oreal, and Ben and Jerry’s, among them — across five continents. Its projects have sequestered the greenhouse gas equivalent of some 1.4 million tons (1.27 million metric tons) of carbon, Lecomte says, and spurred a new trend called “carbon insetting,” in which companies offset a portion of their carbon emissions through agroforestry initiatives within their own supply chains.

…a new trend called “carbon insetting,” in which companies offset a portion of their carbon emissions through agroforestry initiatives within their own supply chains.

Insetting is a type of carbon emissions offset, but it’s about much more than sequestering carbon: It’s also about companies building resiliency in their supply chains and restoring the ecosystems on which their growers depend.

“Insetting looks at the total needs of the community,” says Andrea Asch, manager of natural resources at Ben and Jerry’s, which is working with PUR Projet on initiatives involving coconut and vanilla growers in Peru and Uganda, respectively. “It’s not so much about the carbon sequestration reductions we’re trying to achieve; it’s about helping communities adapt to the impacts from the emissions all of us in the global north have dumped into the atmosphere.”

That said, up through 2020, land management initiatives that reduce carbon emissions, such as carbon insetting, offer greater potential for near-term carbon mitigation than any other strategy, according to the United Nations Climate Change Secretariat.

The Secretariat, in fact, estimated that globally we could reduce carbon emissions 2.4 to 8.5 metric gigatons (2.7 to 9.4 gigatons) from 2015 through 2020 by rapidly scaling land use initiatives that prevent deforestation, change agricultural practices or restore degraded landscapes.

“Land use solutions are critical to achieving a two-degree carbon budget,” says Kate Levin, vice president of North American sales and marketing at Ecosphere+, which markets ecosystem services and forest conservation projects, such as carbon offsets to businesses and individuals. “We can’t afford to wait while we figure out the clean energy revolution.” 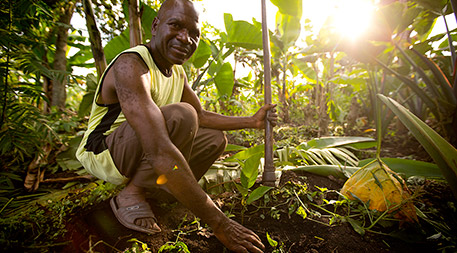 In Uganda, Ben and Jerry’s is financing, through PUR Projet, the planting of 100,000 native trees to help the smallholder vanilla farmers in Rwenzori diversify their income by selling fruit and timber. Research shows that sustainably managed working forests can provide substantial carbon mitigation. Photo courtesy of PUR Project

Levin sees two factors, urgency and availability, that make land use solutions, including incentives to avoid tropical deforestation, particularly attractive now and a key way to plug the hole in needed emissions reductions left by countries’ contributions toward the Paris Climate agreement. Those contributions fall short by 12 to 14 metric gigatons (13 to 15 gigatons) of carbon of the goal of holding global warming to no more than 2 °C (3.6 °F)over preindustrial levels, according to UNEP. The shortfall will be even greater if the Trump administration decides to pull the U.S. out of the Paris deal, which is possible.

Since 2005, when the Clean Development Mechanism was put in place as part of the Kyoto Protocol, hundreds of companies have purchased carbon offsets as one component of their carbon mitigation strategies. Offsets reduce carbon emissions unrelated to the companies purchasing them, typically through investments in wind energy, methane capture projects or forestry initiatives. What makes carbon insetting particularly appealing is that it gives companies insight into what’s going on in their supply chains, where many are seeing the fingerprints of climate change.

What makes carbon insetting particularly appealing is that it gives companies insight into what’s going on in their particular supply chains…including social issues.

“Everywhere we go we hear a similar story of farmers facing ecosystem degradation, soil erosion, extreme climate events, and a lack of water or a lack of regulations for water,” says Lecomte.

Take Uganda, where Ben and Jerry’s is financing, through PUR Projet, the planting of 100,000 native trees, including jackfruit and African cherry. Those trees were selected to help the smallholder vanilla farmers in Rwenzori diversify their income by selling fruit and timber. Promoting timber products may seem counterproductive, but research shows that sustainably managed working forests can provide substantial carbon mitigation. Intercropping these trees also provides shade and ecosystem benefits for the vanilla crops, which are threatened by climate change impacts — heat, longer droughts and irregular rains.

Ben and Jerry’s receives carbon credit for its Rwenzori program through the Clean Development Mechanism. But not all companies that inset their emissions go the route of carbon credits. Certification is expensive says Lecomte, and “if you can see what’s going on in your supply chain, why waste the money? We tell companies, if you don’t need to make a carbon claim, put the money in the trees, not in the certification.”

Nespresso’s massive initiative with PUR Projet — planting 10 million trees in Colombia, Ethiopia, Mexico and Nicaragua to reach carbon neutrality by 2020 — is not certified through the Clean Development Mechanism, though it is audited and certified by a third party, Ecocert, using a similar verification scheme.

We tell companies, if you don’t need to make a carbon claim, put the money in the trees, not in the certification.

Nespresso is investing that money because it sees insetting as a “virtuous cycle,” says its French division president, Arnaud Deschamps. “You plant trees to offset your emissions. You help your farmers with better land, better ecosystems and better revenues, so their children want to be farmers too. And we upgrade the coffee quality for our consumers.”

Research also shows that the companies that offset carbon emissions — whether through insetting initiatives in their supply chains, or external projects in far off regions — are doing a lot more to directly cut their carbon emissions.

When you plant trees to offset your emissions… you help your farmers with better land, better ecosystems and better revenues, so their children want to be farmers too. And we upgrade the coffee quality for our consumers.

L’Oreal USA, for example, is on track to achieving 100 percent renewable electricity for all of its U.S. manufacturing operations and announced in 2016 that it will install two large solar projects in Kentucky and Arkansas. Among Ben and Jerry’s numerous carbon-cutting initiatives, Asch is most proud of its effort to reduce greenhouse gas emissions on dairy farms.

Can carbon insetting actually achieve the potential gigatons of carbon mitigation that UNEP says is possible from land use over the next three years?

In places such as Peru, where Alter Eco’s initial project blossomed into a massive public-private partnership and a biosphere reserve, the potential is enormous.

Generally, however, Levin thinks that insetting is a “smart strategy for every company with a supply chain that’s dependent on a natural ingredient,” but traditional carbon offsetting has higher carbon mitigation potential in the near term.

…insetting is a “smart strategy for every company with a supply chain that’s dependent on a natural ingredient.

“We need to give a real market signal that this type of activity has value,” she says. “Land [use solutions] get us up to eight [metric] gigatons [of carbon reductions], but it’s getting only about 5 percent of public climate finance. We’re not connecting the dots.”

Some are. A major collaboration with food companies and other partners was recently announced at the World Economic Forum. Spearheaded by the Norwegian Government, the US$400 million fund aims to leverage investments up to US$1.6 billion in deforestation-free agriculture.

Ultimately, land management initiatives — whether insetting, changes in agricultural practices or larger scale offsetting — are only effective if the transition to clean energy keeps pace. “We have to sequester carbon and reduce emissions or else we’re toast as a civilization,” says Eric Toensmeier, author of The Carbon Farming Solution, in a recent interview with Civil Eats. Without emissions reductions, Toensmeier warns, “[s]equestration continues at a good rate for between 10 to 15 years and then more or less stops,”

So companies like Ben and Jerry’s, Nespresso and L’Oreal are taking a multifaceted approach.

“We have a huge footprint, and we need to be laser focused. We need to do everything we can across our entire footprint,” says Asch.

Update 2.3.17: A portion of this piece about the Paris climate deal has been updated.
______________________
Meg Wilcox is a senior manager of communications at Ceres, a nonprofit group mobilizing business and investor leadership on climate change and other global sustainability challenges. You can follow Meg on twitter at @WilcoxMeg