What Will Climate Change Bring? Look at the Irish Potato Famine.

The Great Hunger was a humanitarian disaster. Economic inequality and rampant xenophobia made it dramatically worse. 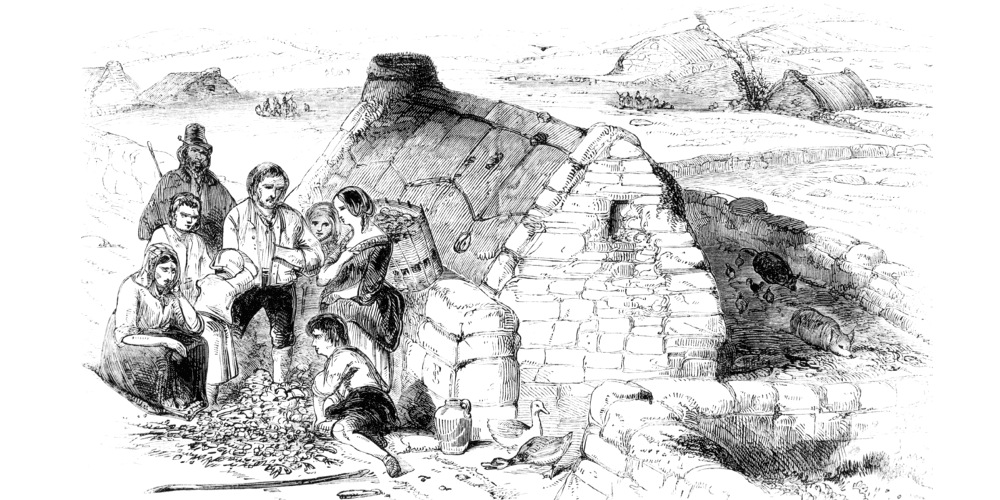 This may feel like a uniquely precarious moment in our nation’s history. Xenophobia is dominating our politics at the same time climate change threatens to spur mass migration from the poorest and most fragile countries in the world.

In fact, we’ve been here before, and experts say we can learn from history. The Irish Potato Famine shows that environmental disasters don’t happen in a vacuum. The famine was the product of an unjust economic system, and its impact could be felt oceans away.

In the 19th century, Ireland was part of the United Kingdom. Wealthy Protestant families with ties to England owned most of the land on the Emerald Isle, renting small tracts to Catholic peasants. While landlords dedicated acres upon acres to raising cattle and grains for export to Britain, renters were left with scarcely enough land to sustain their families.

These plots were so tiny that tenant farmers came to rely on a single, durable, calorie-rich crop — the potato. In the early 1840s, a fungus afflicting potatoes arrived from the continent, and it devastated small farms, leading to widespread famine. One million Irish died. Another million immigrated to Britain, Australia and North America. The population of Ireland has never recovered. Fewer people live on the island now than did before the blight.

“Basically, what you had is a society controlled by what we would today call neoliberal capitalism, in which the rich viewed poor people as totally superfluous,” said Kerby Miller, professor emeritus of history at the University of Missouri. Landlords exploited Ireland’s natural resources and people to generate wealth that was then exported to Britain. When calamity struck, it was the poorest who suffered most. “Once their strength to share and resist was exhausted, people were reduced to fighting murderously over scraps of food because they were so desperately blinded by hunger,” Miller said.

…it was the poorest who suffered most. People were reduced to fighting murderously over scraps of food because they were so desperately blinded by hunger.

The British response was tepid, to say the least. “They didn’t reach out to the Irish at all to help them survive the famine,” said Jay Dolan, professor emeritus of history at the University of Notre Dame. “They thought it was punishment from God.” Britain’s role in the potato famine has led some to characterize the event not as a natural disaster, but as a genocide perpetrated against an ethnic and religious minority.

“The main thing with environmental disasters is that the government has to step up and respond and try to reduce the human suffering, whether it be famine or flooding or whatever it is,” Dolan said. Britain utterly failed in this regard. Inaction is a form of action. Willful negligence can have devastating consequences. That goes for climate change, too.

Neoliberal economic policies — environmental deregulation, cuts to research,tax breaks for polluters — have led wealthy nations like the United States and the United Kingdom to dump vast sums of carbon pollution into the atmosphere, exporting all manner of mayhem to the poorest parts of the world. While the carbon crisis will hurt people all over the globe, those countries that have contributed the least to the problem stand to suffer the most.

…with environmental disasters, whether it be famine or flooding, the government has to step up and respond and try to reduce the human suffering. Inaction is a form of action.

Over the coming decades, extreme heat, severe drought and dangerous floods will drive mass human migration from vulnerable nations in South Asia, sub-Saharan Africa and Latin America. Climate change is already taking a toll on Mexican farmers. Scientists say that rising temperatures could send millions of Mexican immigrants to the United States. The Potato Famine gives a sense of what that might look like.

During the Great Hunger, as it was known in Ireland, hundreds of thousands Irish fled to the United States, prompting severe backlash from native-born Americans. Anglo-Protestant Americans had long seen Irish immigrants as political radicals, Miller said. “American conservatives, people like Alexander Hamilton and John Adams, wanted to prevent all the Irish, including Protestant Irish, from coming to the United States,” he said.

Climate change is already taking a toll on Mexican farmers. Scientists say that rising temperatures could send millions of Mexican immigrants to the United States. The Potato Famine gives a sense of what that might look like.

“American-born people were not really tolerant of the Irish at all,” Dolan said. “There was a lot of fighting. There was a lot of rioting.” Massachusetts governor Henry Gardner described the Irish as “a horde of foreign barbarians.” Motivated by nativism and anti-Catholic sentiment, officials in Massachusetts and New York deported tens of thousands of impoverished Irish immigrants.

Anti-immigrant hysteria fueled the rise of the anti-Catholic, anti-immigrant Know-Nothing Party. Abraham Lincoln, a Republican, lamented its growing popularity. “As a nation, we begin by declaring that ‘all men are created equal,’” he wrote in a letter to a friend. “When the Know-Nothings get control, it will read ‘all men are created equal, except negroes, and foreigners, and Catholics.’ When it comes to this I should prefer emigrating to some country where they make no pretence (sic) of loving liberty — to Russia, for instance, where despotism can be taken pure, and without the base alloy of hypocracy(sic).”

The Know-Nothing Party slipped into the ash bin of history, while the Irish committed themselves to the American experiment. “Despite all the fears and apprehensions that nativists had, or anti-Catholics had, a large number, or a great majority of these people were able to find jobs,” Miller said. “They were able to be productive. They were able to send their kids to public school. They were able to adapt and assimilate.”

In the future, if jobs are available, Miller expects immigrants will be successful in assimilating. But, climate change threatens to impair the economy at the same time that automation displaces an increasing number of American workers, a trend that is already underway. “A huge number of people in this country, working-class people, are suffering because there aren’t any jobs anymore. There aren’t any decent jobs,” Miller said. “They naturally see all immigrants as threats.”

Widespread fear of outsiders has now found a voice in the president, who has called Mexican immigrants rapists, ramped up deportation efforts, and promised to build a wall along America’s southern border. And yet, today there is net negative immigration from Mexico — more people are leaving than coming. And, despite Trump’s accusations of criminality, immigrants are less likely to break the law than native-born Americans.

American conservatives, people like Alexander Hamilton and John Adams, wanted to prevent all the Irish, including Protestant Irish, from coming to the United States

What happens to our politics when heat and drought wither Mexican crops, sparking mass migration to the United States? Will we respond as we did when Irish refugees fled to our shores?

“I certainly do think that the effects of climate change under neoliberal capitalism, under the governing ideology, is just going to be an unbelievable disaster,” Miller said. “Barring a socialist revolution — which completely changes the nation’s value system so that sharing, rather than competition and exploitation, become the primary values — I’m afraid I really don’t hold out a whole lot of hope.”

The future is not yet written. Every generation has the chance to affirm its values. As Abraham Lincoln said, “The probability that we may fail in the struggle ought not to deter us from the support of a cause we believe to be just.”