Tomorrow May Be Too Late: National Security Challenges of Climate Change 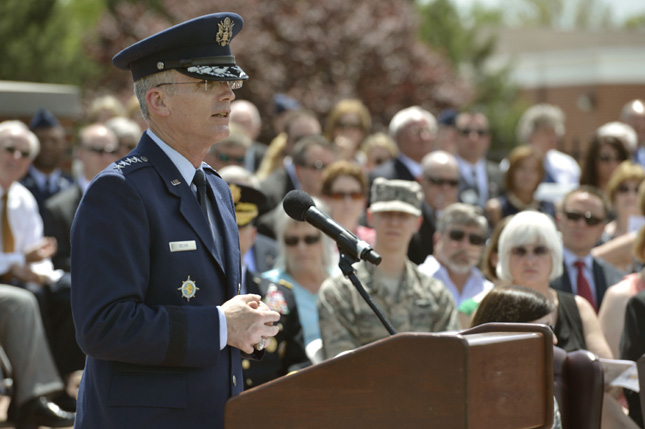 As the Senate returns from recess, passing the annual National Defense Authorization Act will be one of its top priorities—and this year it could include a potentially controversial amendment directing the Pentagon to assess the impact of climate change on national security. In the House, the Langevin amendment surprisingly garnered enough Republican support to withstand a challenge in July. Since then, two more senior military appointees have testified to the importance of understanding the challenges climate change poses to national security.

“The dynamics that are happening in our climate will drive uncertainty and will drive conflict,” said General Paul J. Selva, the vice chairman of the Joint Chiefs of Staff, during a July 18th Senate Armed Services Committee Hearing to consider his reappointment. [Video Below]

General Selva, who was confirmed on August 2nd, will serve for the next two years as the second highest ranking military officer in the United States Armed Forces, tasked with developing and directing the military’s response to imminent threats. His remarks highlighted the various global threats currently facing the United States – including Russia, North Korea, and Iran.

But in response to questions from Senator Elizabeth Warren (D-MA), a minority member of the Senate Armed Services Committee, Selva cited environmental change as another threat to U.S. national security. He described some of its impacts—such as disputes over the Nile River, increased piracy in Somalia, and food instability in the Sahel—as “man-made problems not directly related to climate change but related to how we as humans change our environment.”

“The dams along the Nile River control the flow of water into what was the Fertile Crescent of Egypt,” he said, “and any change to that water flow causes the Egyptians to become more hostile to their neighbors who are putting dams upstream of the Egyptian stretch of the Nile River”—most dramatically, Ethiopia’s Grand Renaissance Dam, which will be the largest hydroelectric plant in Africa when completed later this year. While the nine nations that share the Nile River have so far managed it cooperatively (as is the case in most transboundary water basins), there is great concern about future negotiations in the tense region.

The decimation of fish populations off the Horn of Africa has compromised the livelihoods of Somalian fishermen, arguably pushing some of them to piracy and insurgency. In the Sahel, “a small drought over a limited period of time can decimate the crops and cause instability and make that an area fertile for recruitment of extremistsbecause they see no other way,” said Selva.

“If we see tidal rises, if we see increasing weather patterns of drought and flood and forest fires and other natural events that happen inside of our environment, then we’re going to have to be prepared for what that means in terms of the potential for instability,” he said, adding that we will “have to focus on places where climate instability might cause actual political instabilityin regions of the world we hadn’t previously had to pay attention to.”

General Selva is not the only currently serving defense official to recognize the need to pay attention to climate’s impacts on instability. Lucian L. Niemeyer, who was recently confirmed as assistant secretary of defense for energy, installations and environment (IE&E), wrote in his responses to questions provided in advance of the hearing that “the climate plays a pivotal role in DoD’s ability to execute our missions. The Department has always considered risks from climate related effects such as high winds, precipitation, extreme temperatures and drought to mission readiness and execution.” If confirmed, he agreed to “work with the Military Departments to ensure our facilities and installation plans appropriately consider the impact of a changing climate.”

Niemeyer quoted Secretary of Defense James Mattis, who said “the Department should be prepared to mitigate any consequences of a changing climate, including ensuring that our shipyards and installations will continue to function as required.” In his own testimony, Mattis wrote that “climate change can be a driver of instability and the Department of Defense must pay attention to potential adverse impacts generated by this phenomenon.”

The testimony from these current Defense Department leaders is backed up by a number of former and retired military leaders who also recently testified on Capitol Hill. “The mission of the Department of Defense is simple and straightforward – it is to provide the military forces needed to deter war and to protect the security of our country. Implicit in that mission is that our military needs to be prepared for every threat.  Unfortunately, climate change is one of those,” said retired U.S. Marine Corps Brigadier General Stephen Cheney, chief executive of the American Security Project, on July 12, 2017, at a roundtable discussion hosted by the House Science Committee.

Cheney was one of six panelists—including two retired rear admirals, David Titley and Ann C. Phillips, as well as former Deputy Undersecretary of Defense for Environmental Security Sherri Goodman—who agreed that climate change poses a real threat to the military’s readiness and operations, and thus to American national security.

Where should we focus our limited resources? Climatic “hotspots”—regions that will demonstrate instability over the next 20 years—need to come to the forefront of the defense radar—but they might, as General Selva said, be in places “we hadn’t previously had to pay attention to.”

“The U.S. needs to improve its capacity to predict the likely locations of violent disruptions fueled in part by the consequences of climate change,” said Goodman, who is currently a senior fellow at the Wilson Center. She pointed to melting ice in the Arctic Ocean as a potential source of geopolitical jostling: “The region is more accessible to a wide variety of human activities including shipping, resource extraction, fisheries, tourism and other commerce. This activity level will accelerate in the coming decades. The increased activity brings high levels of risk to that fragile area.” These changes will require investment in marine infrastructure, improved telecommunications, stringent resource extraction standards, and protected land for Alaskan Natives, among many other safeguards. “The United States and the international community are not prepared for the pace of change in the Arctic,” she said.

The United States is in a powerful position to spearhead these issues, developing the predictive capability to address the forthcoming threats of climate change. In her concluding remarks, Senator Warren said, “We need you to lead today on this challenge, General. Tomorrow may be too late.”

This article was originally published on New Security Beat