What Happened to Honesty: False Claims in Sustainability Reports

During my visit last week to Vienna and my discussions with the fabulous leadership of the Vienna University of Economics and Business Institute for Human Resources Management, we spent some time reviewing some (as yet unpublished) research that has been conducted by the Vienna team on the differences between claims made in GRI Sustainability Reporting and what actually gets reported.

The team had selected the 131 companies of the Forbes 250 list, which had published a Sustainability Report. Focusing on nine Labor Indicators (LA1, LA2, LA4, LA5, LA7, LA8, LA10, LA13,LA14) and six Human Rights Indicators (HR1, HR2, HR4, HR5, HR6, HR7), the Vienna team led by Professor Michal Mueller-Camen,  analyzed which indicators were fully reported in all elements in line with the GRI Indicators and protocols, versus the claims made by companies in their GRI Index.

The results are quite astounding. Of 86.2% of companies that declared disclosure against the indicator LA1 (Total workforce by employment type, employment contract, and region broken down by gender), only 10.7% of companies were found to have a full and complete disclosure. The same story, give or take a few percentage points either way, applies to every single one of the LA Indicators, with an average of over 70% declared reported and an average of 12% actually reported in practice. The starkest difference was found in reporting against LA13 (Composition of governance bodies and breakdown of employees per employee category according to gender, age group, minority group membership, and other indicators of diversity.) where 90.8% of companies declared they reported against this indicator and only 1.5% were found to have fully reported. The LA indicator which was found to be fully reported most frequently is LA4 (Percentage of employees covered by collective bargaining agreements) with a full disclosure rate of 38.2%by companies.

In the area of Human Rights, generally, the level of declared disclosure was lower – between 50% and 69%, averaging 62%, and the average rate of full disclosure was also higher, averaging close to 20%. The indicator that was most frequently fully disclosed is HR6 (Operations and significant suppliers identified as having significant risk for incidents of child labor, and measures taken to contribute to the elimination of child labor.) with 31.3%of companies assessed as fully reported.

I was chatting this week to one of the distinguished thought leaders in the sustainability arena, Richard Boele, founder and  principal of Australian-based Sustainability Consulting firm, Banarra. He mentioned some similar research that his company had conducted in 2010 on behalf of the CFMEU Energy and Mining Division, which is the leading union that represents workers in the mining, oil, gas, port and power industries. The CFMEU’s interest in this research was shaped by a sense that unions and workers are vital stakeholders in the sustainability reporting process, but are generally not engaged in this process in the Australian context. The feeling was that reporting was not meeting the expectations of local stakeholders.

The results of this research using ten Australian Sustainability Reports matched almost exactly the findings developed by my colleagues in Vienna. There was a vast inconsistency in the claims made about what was disclosed and the actual disclosures. See the summary table below from Banarra’s report. 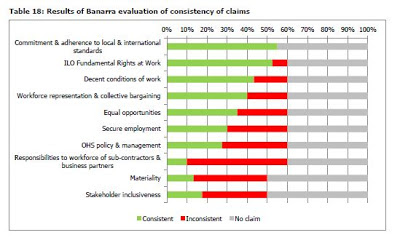 Even reports which are GRI-checked and/or externally assured contain these inconsistencies.

Why tell lies in reports?
Why are companies making inaccurate and perhaps even deceptive claims in their Sustainability Reports? What interest do companies have in producing false reports?  We can speculate:

Did I miss anything? Whatever the reason, to claim you have reported, and then not report, is defeating the purpose of sustainability reporting, which is all about building trust. If companies cannot get this right, what trust can we have in them and their reports? Not more than 20% trust, apparently.

Is it enough to have a good framework?
Microsoft says that the browser is only as good as the OS it runs on. Hmm, they might have a vested interest there, I suspect. In reporting, the report is only as good as  the accuracy and relevance of its content. The GRI Framework was developed as a set of voluntary disclosure requirements that are generally found to be universally relevant to a representative range of stakeholders in the context of  the sustainability impacts of global business activities. If it’s in there, it must be relevant and someone wants to know. But then, what’s the point of having a leading global framework if companies are abusing it? How can the GRI Framework be credible if the reports that companies produce are not?  Can the GRI have absolutely no ownership for creating a situation in which companies are abusing the reporting framework, unknowingly, deliberately or for whatever reason? If you knew that every report you read is only 20% accurate, would you ever take the time to open another report again? Surely this cannot be the outcome that the GRI wishes to see.

Reporting Accountability
In the most recent  GRI’s own GRI 2011-2012 Annual Report, CEO Ernst Ligteringen, opens with: “Sustainability reporting is a rapidly growing practice, and GRI provides guidance and support to all organizations worldwide that want to report their sustainability performance. We see a vital shift in sustainability reporting, moving from an experimental practice of pioneering companies to a rapidly widening adoption in the mainstream.” More importantly, he goes on to say that the range of users of sustainability is widening. More reports, more interest. There is no mention of the quality and integrity of the reports that are published and this doesn’t appear as a material issue in the GRI’s own materiality analysis. While I have heard the GRI in the past say that it is not their mandate to  “police” reports, I continue to believe that complete avoidance of the issue of report quality is not sustainable. This is like tobacco companies saying they are have no responsibility for the people who get sick or die after using their products. Perhaps the GRI should aspire to be the Unilever of Sustainability Reporting – changing consumer behavior so that the way their products are used can make a more positive contribution to sustainable society.

In the run-up to G4, the proposed “In Accordance” threshold creates demand for even broader disclosure and more disclosures and indicators to report on. What chance does G4 have of changing the world if the reality is that G3 is not being used reliably?

The Stakeholder Police Force
The GRI might say that it’s the stakeholders who should be picking this up. Stakeholders who perform research on reports may do this, as the two examples I mentioned above. The stakeholders should be the police. But are they? Can they be? If every stakeholder has to double-guess every report, and spend hours checking whether the indicators are correctly reported, then we are going backwards not forwards. In this case, voluntary reporting could be deemed a Big Flop.

The solution?
The solution should be that companies take responsibility and ensure their reports are accurate. Utopia. You do not need a Ph.D. to understand the GRI Framework protocols and apply them correctly, though it is possible to make mistakes or overlook some detail or other. In this case, companies have the option of seeking external support.  This could come in the form of external verification or part of an assurance process. Similarly, my consulting company, Beyond Business, offers a Sustainability Report pre-publication review service in which we analyze every aspect of a report prior to publication including detailed compliance with the GRI (or other) frameworks. Invariably, this exercise identifies inconsistencies which can be corrected before publication. Companies which do this are demonstrating accountability – they want their report to be accurate.

The other current option for reporters is the GRI Application Level check. This is an easy option because it covers only a sample of disclosures and indicators reported. It is not a complete check, but the GRI Statement which is issued to companies which “pass” the check says: “GRI Application Levels communicate the extent to which the content of the G3 Guidelines has been used in the submitted sustainability reporting. The Check confirms that the required set and number of disclosures for that Application Level have been addressed in the reporting and that the GRI Content Index demonstrates a valid representation of the required disclosures, as described in the GRI G3 Guidelines.” Ahem, it seems that in many cases, this statement is not correct either.

Maybe it is time for the GRI to bite the bullet and offer reporting checks which confirm that every disclosure and indicator has been reported in the correct and complete way, as defined in the GRI Framework, when claimed to have been reported by the reporting company. Anything less is misleading and serves to perpetuate this report-bad-feel-good euphoria that Sustainability Reporting seems to have succumbed to.

The Big Picture
I hear some of you object: Surely this is cosmetic? Reporting is not about ticking boxes. The Framework is an enabler, not a shackle. The contents of reports often include far more information than the GRI Framework requires. Shouldn’t stakeholders focus on the Big Picture, rather than nitpicking about GRI accuracy? That’s one way of looking at it. Another way would be to say that sloppy or careless or misleading reporting is not good enough. Even if the report contains the fanciest materiality matrix in the world, this does not compensate for inaccuracies in the application of the GRI framework. False reporting breaks trust. Period.

Trust
One of the most difficult dilemmas of Sustainability Reporting has always been the degree to which we can place our trust in the voluntary disclosures of companies. If companies are  not telling the truth about what they have not reported, how can we be sure they are telling the truth about what they have reported? Using the GRI Framework is not mandatory. The choice to use the GRI framework implies a responsibility to do so correctly. Companies who want to have their ice-cream and eat it are damaging both their own reputation and that of Sustainability Reporting in general. As a frequent report reviewer for CorporateRegister.com and for Ethical Corporation, one of the first things I check is whether the company has accurately used the GRI framework. If I find an inconsistency, my trust in that company plummets.