The Climate Challenge requires a shift from “Me” to “We”

Bob Doppelt will be speaking at TSSS in February of 2013 – we’re very excited to have him join us!

Albert Einstein once said that humans suffer from a sort of optical illusion. We exist only because of the Earth’s climate and ecological systems. However, we believe we are free standing beings that survive independent of those processes.

The recent international climate change negotiations held in Bonn, Germany, are a classic example of the detrimental outcomes of this fantasy.

Despite the economic downturn, human-generated global greenhouse gas emissions in 2011 were the highest in history. Most climate scientists now believe that the failure to reduce emissions means that average surface temperatures will almost certainly rise by 2 degrees Celsius above pre-industrial conditions in the coming decades, and possibly much more. Far-reaching human suffering and death, damage to property and infrastructure, and economic decline are some of the sure fire consequences.

Yet, world leaders at the Bonn summit denied or ignored this reality.

Instead, large emitting developing nations such as China and India hemmed and hawed and delayed meaningful action on a workplan that would result in a new global emission reduction treaty. Japan and Canada adopted the U.S. position and announced there were dropping out of the Kyoto protocol, leaving the EU as the only industrial nations committed to it. And, although progress was made on some of the details of a new international Protocol, the bigger concern now is that the entire notion of a new treaty might be at risk.

Economic and political self-interest is, of course, at the heart of the problem. Each country based its decisions on their perceptions of what would be in its best interests. But this ‘Me first and only’ thinking results from deep-seated misperceptions about how the planet functions and what is required to create and sustain economic and social wellbeing. World leaders have confused national self-interest with freedom, leaving them — and everyone else on Earth — much less free. 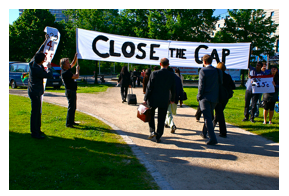 The climate emergency cannot be resolved until government officials overcome this erroneous thinking. The starting point is the realization that only by prioritizing an expansive ‘We’ — people all over the world, and the climate and ecological systems that create and sustain them — will any nation be able to draw people out of poverty or maintain long term economic wellbeing. Meaningful action on climate disruption requires a fundamental change from the exclusive focus on the self-focused ‘me’, to getting what they want by prioritizing a big ‘We.’

To make this shift, officials must first make a commitment to see the ecological, social, and economic systems they are part of. They must understand that their economy is completely dependent on stable climate and ecological systems. No nation, rich or poor, will escape the ravages of uncontrolled climate disruption. Everyone is in the same soup.

After the grasping this fundamental law of interdependence, they must commit to accounting for all of the impacts of their activities on the systems they are part of.

The U.S. must cop to the fact that cumulatively it has contributed about 30 percent of the emissions that are destabilizing the Earth’s climate. Canada, Japan, the U.S. and other industrialized nations must concede that their current excessively high per capita emissions are undermining the climate and contributing to social and economic troubles worldwide. China and India must also admit that their emissions are exacerbating climate disruption.

Then, world leaders must adopt a clear set of moral principles to guide their response to the impacts they are having on the ecological, social and economic systems they are fully dependent upon. Morality is not about sanctimonious stuff or heavy religious doctrine. It involves basic decisions about what our duties and obligations are to other people.

The most universal moral tenet — held by almost every religious tradition on Earth and embedded in most national laws — is to do no harm. Any action that causes unjustifiable human suffering and death is morally wrong.

This step demands that officials from every nation acknowledge their obligation to dramatically cut their emissions in order to reduce related human suffering and death they cause. They must then jointly act on their moral duties by establishing and enforcing a meaningful international climate treaty.

It’s time for world leaders to understand that freedom in the service of economic self-interest is eroding the ecological basis of life and increasing fear and suffering worldwide. True freedom is freedom from the constraints of outdated, erroneous, and harmful ideas and perceptions. If progress is to be made at future U.N. climate summits, all governments must grasp that no nation exists independently of the Earth’s climate and ecological system, and that the consequences of uncontrolled emissions on those systems will leave every nation, now and in the future, fighting to survive.

Bob Doppelt is Executive Director of The Resource Innovation Group, a global climate change education, research and technical assistance program affiliated with the Center for Sustainable Communities at Willamette University in Oregon, where he is also a Senior Fellow. His newest book is From Me to We: The Five Transformational Commitments Required to Rescue the Planet, Your Organization, and Your Life. For more information, please visit www.me-to-we.org.