The Rising Tide of Water Insecurity: Moving from Risks to Responses

“Water is the frontline of climate change. It’s what every report that you see identifies as the sort of first and foremost effect we see from a climate changing world,” said Sherri Goodman, a public policy fellow at the Wilson Center and formerly of CNA and the U.S. Department of Defense, on October 19.

As the climate changes, availability and access to water is changing and growing increasingly uncertain in some regions. Water has multiple implications for human development and national security. It affects agriculture, drinking water, and global health; diplomacy through transboundary agreements and upstream and downstream water sharing; and defense outcomes, such as state fragility, humanitarian missions, and new military equipment and basing requirements.

Water has multiple implications for human development and national security.

“Water problems, if they are prolonged enough, relate to and drive social instability,” said retired U.S. Army Lieutenant General Jeffrey Talley, now a global fellow with the IBM Center for the Business of Government. “And that will eventually drive political and economic instability, and then it will absolutely become a security issue.”

There are, however, also many opportunities for cooperation and peacebuilding around water. The essential and shared nature of water resources encourages collaboration, even among adversaries, as in the case of the Jordan and Indus Rivers.

Two panels of experts at the Wilson Center discussed how to maximize the cooperative potential of water in the face of climate change, moving from a framework of risk to response. They spoke about technical innovations, management and transparency of hydrological data, and institutional changes that will help policymakers and practitioners blunt the potential for resource-driven conflict.

Approximately 21 of the world’s 37 largest aquifers are being overexploited, pumped faster than they can recharge, said Talley. And demand is only increasing due to population growth and development. Working against supply is climate change, declining groundwater tables, and pollution.

Rod Schoonover, director of the environment and natural resources at the National Intelligence Council, said there is a great deal of agriculture reliant on unsustainable groundwater extraction – what he called a short-term solution to food security, but a long-term challenge to managing natural resources. Desalination plants can act as a “lifeline” for many societies, he said, but they also create “single points of failure” and tempting targets for “security incidents.”

Water problems, if they are prolonged enough, relate to and drive social instability

The implications of water scarcity are numerous for health, education, and even the empowerment of women and girls. “We will never get to the rest of the [Sustainable Development Goals], unless we can meet Goal 6,” said Christian Holmes, deputy assistant administrator of the Bureau for Economic Growth, Education, and Environment at the U.S. Agency for International Development and the agency’s first Global Water Coordinator. Goal 6 – to ensure safe and affordable drinking water, sanitation, and hygiene for all by 2030 – is critical, he said, “because [it enables] young children and young women to be able to get past certain major obstacles in human development.”

For example, many young women and girls are forced to drop out entirely from school after they begin menstruating for lack of proper facilities, said Holmes. In Kenya, Doris Kaberia, director of country programs at the Millennium Water Alliance, added that many health centers themselves lack proper water and sanitation facilities, leading to the closure of maternity wards.

Stunting in children – decreased growth because of lack of nutrition – is also linked to inadequate access to clean drinking water and sanitation. In India, the stunting rate is about 45 percent in children under five, said Holmes. Waterborne diseases like diarrhea drain the body of resources and in children can lead to permanent physical and cognitive effects with no chance of reversal.

From the Ganges to the Mekong

Although there are serious challenges stressing supply, retired U.S. Army Brigadier General Gerald Galloway, now a professor of engineering at the University of Maryland, College Park, said the crisis is less about quantity and more about how we manage it.

“There are 276 shared water courses in the world,” said Ken Conca, a fellow at the Wilson Center and professor at American University. But “fewer than half have any kind of international accord, treaty, [or] some sort of legal arrangement.” What’s more, existing agreements are often static and inflexible.

The Ganges River Accord, signed by Bangladesh and India in 1996, created a water allocation scheme around “fictional water,” Conca said. The two nations based how much water each country would receive on figures from the highest flow years of the preceding century. “That’s clearly not the kind of flexible agreement that monitors and adapts how we will deal with drought years,” he said. “How will we deal with sustained droughts and extremes that become the new normal?”

Such concerns have been elevated as a global priority within the national security apparatus, said Goodman. At CNA, a research organization based in Washington, DC, she led the first Military Advisory Board report on climate change, which emphasized the implications of reduced access to freshwater and was signed by 11 retired three- and four-star generals and admirals. She also noted increased attention from the U.S. intelligence community, including a 2012 unclassified global water assessment and 2016 assessment on climate change generally.

Regional issues, when exacerbated by scarce natural resources, can serve to build up a “cauldron of risks,” said Goodman. “And we don’t know exactly where that tipping point is.”

Fewer than half of the 276 shared water courses in the world have any kind of treaty or accord.

Vietnam, Laos, Cambodia, and Thailand depend on the Mekong’s flow from Tibet and with China having already constructed six dams, they fear the effect new dams will have on food production. Hydropower can alter flows and has an impact on sediment accumulation, which can greatly affect downstream ecosystems like Vietnam’s delta, which is already facing salinity problems, said Chandrapanya.

The Lancang-Mekong Cooperation Mechanism, launched in March, offers an opportunity for “closer cooperation [and] better sharing of information and data,” which could reduce tensions, she said, but there is much work to be done as development plans march forward in many basin countries.

Sandra Ruckstahl, an independent consultant and author of the USAID Water and Conflict Toolkit, urged focus on the long-term relationships between actors in a community when implementing water projects. Making and nurturing these connections encourages collaboration and negotiation rather than conflict. “As we consider security and potential for peacebuilding through any of our development investments,” she said, “we have to think about those perceptions and implications for long-term effects.” 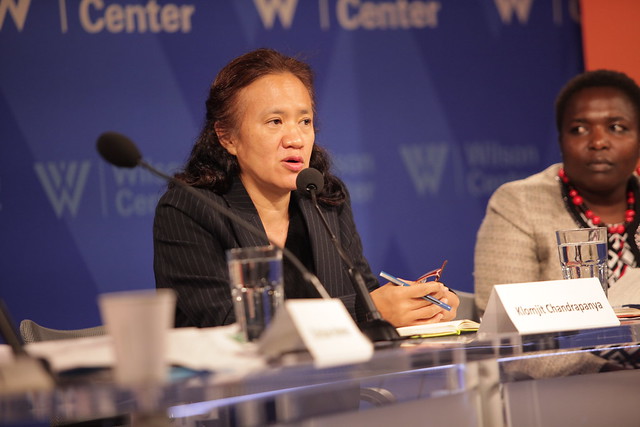 “People realize that water is a connector,” said Kaberia. From a policy perspective, sharing hydrological data is one way to build on this collaborative nature.

There is a wealth of water data, knowledge, case studies, and solutions available, said Talley. But much of the information lacks standardization. After Kenya decentralized its government in 2013, for example, hydrological data was literally fragmented on different laptops across different organizations, said Kaberia. Efforts are now underway to consolidate the data and provide government decision-makers with online access.

There is a wealth of water data, knowledge, case studies, and solutions available but much of the information lacks standardization.

The U.S. Agency for International Development relies on data from the Famine Early Warning Systems Network and agencies like the National Air and Space Administration, National Oceanic and Atmospheric Administration, and U.S. Geological Survey to “provide projections on food insecurity, based on vegetation analysis [and] soil analysis,” said Holmes. Some of the data is shared with local partners and used to train communities in reading and understanding climate projections. But “what we really need is a platform where big data can be integrated and cognitive analytics can be applied, providing shared insights worldwide,” said Talley.

A further response in the policy realm is to create more flexible accords, said Conca. Agreements like the Ganges River Accord focus on allocating a “fixed pie of water.” Instead, he suggested thinking more about “expanding that pie through sensible and cooperative management” and building in stronger dispute resolution mechanisms.

Conca also proposed environmental impact assessments for dams and other major water projects that account for how they may affect the health and livelihoods of downstream communities, not only the immediate environment.

He suggested using the SDGs as a starting point to push countries to enact changes in water management. “Whether we’re talking about livelihoods, about gender equity, about public health,” Conca said, “water is one of the real fulcrums for multiple gains across multiple goals.”

“The larger frame is one of uncertainty and managing risks…and in that context, the good news is that there are a lot of cooperative opportunities. There are barriers to tapping them, but certainly we have to try.”

Photo Credit: Lake Victoria, Uganda, courtesy of the U.S. Agency for International Development.
____________________
Sreya Panuganti is an intern with the Environmental Change and Security Program and pursuing a Master’s degree in international development studies at the Elliott School of International Affairs, George Washington University.