US Coastal Communities may become an endangered species

Sea-level rise will put approximately 13 million coastal Americans at risk of displacement by 2100, but the first to move will be the most vulnerable communities. In Reaching Higher Ground: Avenues to Secure and Manage New Land for Communities Displaced by Climate Change, Wilson Center Global Fellow Maxine Burkett and her coauthors look at Native American communities on the frontlines of climate change as a model for how vulnerable coastal communities can successfully relocate. Currently, there is no central mechanism within the federal government for relocating communities displaced by climate change. Federally recognized Native American communities have historically coexisted alongside the United States government as sovereign entities, and their many avenues – legal, policy, and corporate – to acquire land could provide a starting point for addressing this imminent challenge. The authors identify tools communities can use to secure new homes and preserve their ownership of evacuated lands.

Currently, there is no central mechanism within the federal government for relocating communities displaced by climate change. However, individuals earning more than US $100,000 per year will have a variety of options at their disposal. 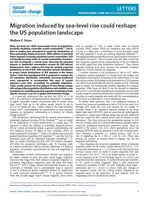 Current discussions of sea-level rise characterize it as a coastal issue, which underplays its potential impacts on land-locked communities. Mathew E. Hauer examines the social implications of sea-level rise in his Nature article, “Migration induced by sea-level rise could reshape the U.S. population landscape.” Hauer finds that 56 percent of U.S. counties could be affected by intra- and inter-state migration associated with a 1.8 meter sea-level rise. Adaptation measures, such as “sea walls, beach and marsh nourishment, pumps, or elevat[ing] homes and roads to protect both people and property” could mitigate the volume of migration. However, according to Hauer’s theoretical framework, only individuals earning more than US $100,000 per year could use these methods to mitigate climate-related effects on their homes—which is only the top quartile of the U.S. population living in vulnerable coastal communities. Therefore, inland communities “could see tens of thousands of SLR [sea-level rise] in-migrants, and many coastal communities could lose tens of thousands of migrants.” This report emphasizes “the importance of accounting for future migrations associated with climate change in long-range planning processes” across the country, not just along the coasts.

This article first appeared on the New Security Beat
________________
Antony Martel is an intern with the Environmental Change and Security Program at the Wilson Center. Antony currently studies International Relations at the Norwegian University of Life Sciences in Ås, Norway. His interests are on international norms and the role of social movements in constituting normative behavior.