Sales of electric vehicles in China are picking up speed, but there are lots of obstacles on the road ahead. 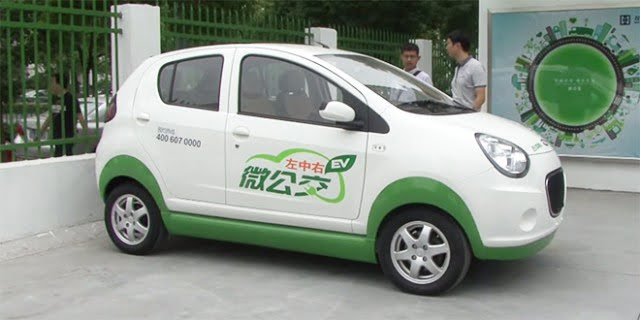 The Chinese government wants to increase the number of electric vehicles on the nation’s roads to 5 million by 2020.

The statistics are impressive: sales of electric vehicles (EVs) in China are likely to reach 400,000 this year, a more than 150% increase on the figure for 2015.

China is now the world’s largest EV market. The government has big ambitions for the sector, setting a target of increasing the number of EVs on the nation’s roads to 5 million by 2020.

China’s EV policy is being driven by an urgent need to cut back on the serious air pollution while at the same time taking a world lead in the fast-expanding global EV market.

With transport estimated to account for about 10% of China’s total emissions of greenhouse gases, promoting the increased use of EVs is seen by many as an important way of combating climate change.

China’s EV policy is being driven by other factors: there is an urgent need to cut back on the serious air pollution that blights many cities, and the country’s planners are eager to take a world lead in the fast-expanding global EV market.

But while China – the world’s biggest emitter of greenhouse gases – is trying hard to decarbonise its transport sector, weaning people away from polluting internal combustion engines will be an uphill task.

According to official statistics, at the end of last year there were just under 280 million vehicles in China, more than 60% of them cars. China is now the world’s biggest car market, with over 20 million cars being added to the country’s already crowded roads in 2015.

Though sales of EVs are rising fast, they still account for just a little over 1% of the total car market. In comparison, in Norway, EVs have a 22% market share.

Government measures aimed at encouraging EV use have met with limited success. Generous subsidies have been given to EV manufacturers, sometimes amounting to 60% of the sales price of vehicles.

While some manufacturers have used the subsidy regime to build up solid EV businesses – investing in new production processes and developing technology – others have set up companies solely to take advantage of government handouts.

Recently, the government imposed quota requirements on vehicle manufacturers, stipulating that they must produce a certain ratio of EV or hybrid vehicles.

There are now more than 200 EV companies in China, producing 4,000 brands of cars and other vehicles. Scandals have come to light in which companies grabbed subsidies but produced nothing.

New government regulations – which include stipulations on levels of technology investment and warnings of a withdrawal of subsidies in future years – are predicted to cause a massive shakeout in the market. Analysts talk of an EV “bubble” that is about to burst.

Analysts talk of an EV “bubble” that is about to burst.

The results have been mixed. Some big manufacturers producing both internal combustion vehicles and EVs have simply increased production of zero-emission EVs in order to offset emissions from other vehicles.

Analysts say that as a result there is little sign that conventionally powered vehicles are becoming more fuel-efficient or that emissions are being lowered.

…a big problem associated with China’s EV developmentis that China is still largely dependent on coal for its electricity supply.

There is another big problem associated with EV development: despite rapid expansion of its renewable energy sector, China is still largely dependent on coal for its electricity supply.

Some analysts point out that, in the short term at least, a wholesale expansion of the EV market could drive up rather than reduce greenhouse gas emissions. They say power plants should be cleaned up before further expanding EV sales.

But Chinese leaders seem determined to achieve EV targets. Recently, the government imposed quota requirements on vehicle manufacturers, stipulating that they must produce a certain ratio of EV or hybrid vehicles.

The new regulations are causing considerable consternation among some foreign car manufacturers, particularly German firms, which have a sizable slice of the Chinese market.

Though brands such as VW and BMW are popular in China, they have been slow to develop EVs in comparison with their Japanese and American rivals, and when quotas come into force they risk a big drop in sales.

The outlook is especially difficult for VW, which recently cut 30,000 jobs in Germany and elsewhere in order to save costs following multibillion dollar payouts because of a scandal over falsified emissions.

VW has become largely dependent for sales growth on the Chinese market. Last year it sold 3 million cars in China – four out of every 10 vehicles made by the company.