Do Children have to Choose Between Work or Poverty?

“I was involved in the implementation of our programs to address child labor issues in India. Some time ago, our team went out to India to monitor how things were happening in the field. Our host, the owner of a local factory, was taking us to see conditions there. We were in his car, and suddenly he stopped, jumped out of the car and went to talk to a young boy, who was hanging out on the side of the road with some other kids.”

“When our factory-owner returned, he explained: That kid used to work in our factory. Now, because of IKEA’s strict policies prohibiting child labor, we let him go and he’s on the streets selling drugs.”

This was the moment when the IKEA team, including IKEA Foundation‘s Head of Communications & Strategic Planning Jonathan Spampinato, who recounted this story to me, realized that child labor is not the issue.

Poverty is the issue.

According to UNICEF, more than 28 million children are engaged in child labor in India. An estimated 4,700 children under the age of five die every day. It is poverty that forces children to bypass education and take jobs in factories, in cottonseed production, mining and many other forms of labor, including hazardous work. It is the need to support the household income that drives parents to send their children to work instead of to school. 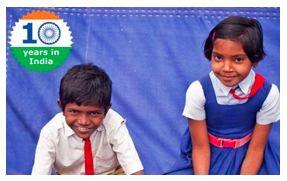 It was this realization that caused IKEA to change the focus of their partnership in India from eliminating child labor to one which advances child protection, a definition broad enough to include aspects of children’s rights, education, healthcare, nutrition and structured monitoring and assistance to ensure approaches to ending child labor address not only the children but also their families and their standard of living.

The Indian government recently passed a legislation to ban child labor for children under the age of 14 in any industry, including a blanket ban on employing children below 18 years in hazardous industries like mining, at the risk of three years imprisonment and a monetary fine. Certainly a move in the right direction but the question remains: What will be the plight of children excluded from the labor force if their families cannot generate enough income to support them?

This question has been at the root of the IKEA–UNICEF partnership, which is celebrating 10 years of positive impact from working to improve the life of families in several Indian states, notably Uttar Pradesh, the “carpet-belt”, where IKEA sources many of its carpets.

The IKEA-UNICEF partnership reports remarkable results: improvement in teacher quality and curriculum in over 13,000 schools, 15,000 children attending schools instead of going to work, over half a million people trained to protect children, and the establishment of 600 Child Protection Committees working to end child labor.

Overall, the program has reached 74 million children. In addition, basic sanitation and healthcare has been improved for hundreds of thousands of families.

For both organizations, addressing the root causes of child labour, and not only the symptoms, has been crucial from day one. It’s more than just funding.

Check-book activism doesn’t help. You need a team. People need to get involved. This is a long term commitment. When we started out, it was clear that we wanted to reach millions of children and that it would take time. We wanted to establish a long term program with measurable impact. Now, after 10 years, we are in discussion, planning the next 10 years, and the key metrics that we will track to ensure we achieve our mutual goals.

But let’s not negate the crucial need for funds. IKEA has invested over $125 million to date.

Ikea’s IWAY has been the framework for the company’s policy of supply chain monitoring since 2000, with a dedicated Code of Conduct called the IKEA Way on Preventing Child Labor. By 2011, 67 percent

of IKEA’s suppliers had been approved against this Code’s provisions. Other features of IWAY’s practical implementation included socially conscious sourcing based on human rights principles, such as a commitment to Better Cotton Initiative certified cotton for all requirements by 2015, and a partnership with the Fair Labor Association to improve labor conditions in China.

The UN makes it clear that child labor must be eliminated, while recognizing that this is the symptom, not the cause, of impoverished communities. Ceasing to employ children could create more problems than it solves, unless appropriate channels to replace lost income are accelerated. The Government of India is right to legislate a ban on child labor – the potentially difficult consequences of banning child labor should not be an excuse for inaction, but a risk to be managed.

Perhaps parallel legislation to ensure that alternative infrastructures are put in place to support families’ economic well being during the transitioning of 28 million children out of the workforce might also be relevant, although, in a populous country like India, this is by no means a quick fix.

In the meantime, the broader view of corporate responsibility as exemplified by the IKEA–UNICEF partnership is stepping into the fray. Going beyond the company’s direct relationships and sourcing arrangements with local suppliers, IKEA’s commitment is to achieve better outcomes by working to eliminate the cause, not only the symptom, of child labor.

And while UNICEF and IKEA are making great progress, the tipping point has yet to be reached.

Originally posted on CSRwire
________________________________
Elaine Cohen is a CSR consultant, Sustainability Reporter, HR Professional and ice cream addict. Elaine is the author of CSR for HR: A necessary partnerhsip for advancing responsible business practices (Greenleaf, 2010). You can follow her via twitter at www.twitter.com/elainecohen or visit her website at http://csr-reporting.blogspot.ca/